The UK’s biggest-selling singles artist of the 1980s, Shakin’ Stevens took Merry Christmas Everyone  to the top in 1985. Its original planned release was put back by a year to avoid clashing with the runaway success of Band Aid’s charity single Do They Know It’s Christmas?

Here’s some footage of Wirral Ukulele Orchestra at a local gig:

Clean Bandit‘s Rockabye is the first song in UK chart history to become Xmas number one after already being at the top of the charts.

1983 saw The Flying Pickets‘ a capalla cover version of Vince Clarke’s Only You become the Xmas number one, only a year after he’d had a hit with it partnering Alison Moyet in the duo Yazoo.  Here’s a nice fingerstyle arrangement from WS64:

Saturday morning saw me up early to grab the bus to the Festival site in time for the first workshops of the day. Arriving with tons of time to spare, I wandered round the Marketplace in the Gilchrist Room of Easterbrook Hall, packed with stallholders selling ukes, straps, books, T-shirts, raffle tickets & more.

I spotted Colin Tribe, who is a very prolific poster of chord melody tunes on YouTube & writes the syllabuses for ukulele grade examinations. I’d previously bought a set of his arrangements & his Uniquelele book, so we had a nice chat & he showed me some better fingerings for some of his music, kindly giving me an updated copy of Spanish Flea to try out & a uke-shaped keyring.

I also said hello to Matt Warnes, who runs World of Ukes & would be performing later in The League of Ukulele Gentlemen. He gave me a spare copy of UKE Magazine to pass round PLUC members who’ve not read it before (& is arranging for uke club discounts on his merchandise – let me know if you’d like details). I’ve been to a couple of the events he organises before – including seeing Taimane Gardner in Birmingham & a Big Boat On The Mersey weekend, which culminated in us playing our ukes at the Cavern Club!

Then off to the first of three workshops I was attending today: An Introduction To Chord Melody Solos, with Stuart Butterworth. I was interested to see how this would be run, as Stuart had led a mass session on the final afternoon of last year’s UFoS & teaches many different groups in Dumfries & Galloway. He gave us extracts of his new book & took us through the chords, tabs & sheet music. There were useful summary sheets of the various chord voicings used as a way of helping people familiarise themselves with the fingerings before playing.

The second workshop was Richard Durrant‘s Ukulele Circuit Training One. He’s a classically trained guitarist who was introduced to the ukulele by the Ukulele Orchestra of Great Britain’s George Hinchliffe when they both were at the Royal College of Music – George gave him a uke tuned in fifths (ie like a violin) & he was soon enjoying playing that & the more usual reentrant-tuned one.

His workshop was very different & useful: at the outset explaining how vital it is to cultivate a good neutral posture with relaxed & efficient hand positions; giving us a two-finger strumming pattern (‘strumming with one finger is like being a drummer with only one stick’); and getting us to play rhythms & sequences that suddenly turned into other well-known tunes.  These techniques were designed to improve your playing & help advance you as a musician by guiding you towards effective ways of focused personal practicing.

There was then just under an hour for lunch before the afternoon concert. Folk eyed me eating my packed meal enviously as the queues for the eateries were massive with so many people rushing to use them simultaneously. One of the advantages of being in a self-catering flat, as I had grabbed plenty of interesting vegan goodies from M&S & Morrisons when I arrived on Thurs afternoon, so I could make decent meals & take snacks with me instead of risking nothing being suitable for me at the venue. 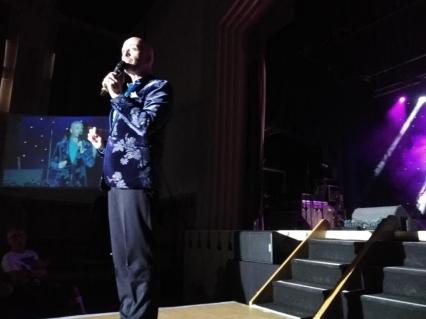 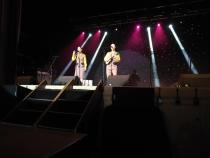 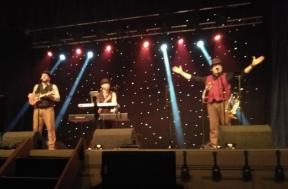 The League of Ukulele Gentlemen 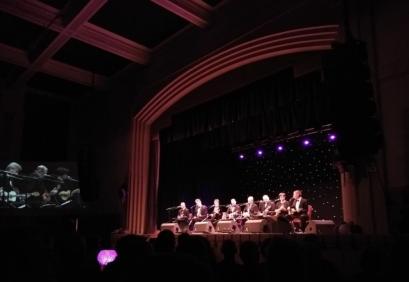 A Few of My Photos From Saturday’s Shows

The afternoon concert was nearly four hours long & packed with an interesting selection of acts. The compere, Paulus, did an excellent job throughout, as he had last year:

No rest after the gig as it was straight into another workshop! Sandwiches were included (& somehow I ended up with two – possibly because someone else had eaten mine last year!). This was Circuit Training Two, with Richard Durrant again.  A little recap of some of the introductory principles, then off into another selection of interesting & deceptively tricky strengthening & dexterity exercises that aim to improve your accuracy, articulation & other areas of playing. More of that is covered in his online Ukulele Launch Pad course.

After the workshop, I was surprised to see folk were already queuing to gain entry to the main concert hall, over an hour before the doors were due to open for the Gala Concert from the Ukulele Orchestra of Great Britain. So I joined the throng & swapped uking tales with people until we were let in. Being on my own I still managed to get fairly near the front, with a good view.

Eight UOGB members were performing & it was a full gig, with interval. as expected, it was all very slick, tightly choreographed & enjoyable, with a mix of familiar numbers & others I didn’t know they covered. It was nice to see Dave Suich in full performance mode! They got a standing ovation at the end.  What a way to finish the day! I grabbed a taxi back to town whilst others jammed long into the night…

Here they are doing Highway to Hell:

More sad news today with the death of Chas Hodges, from Chas ‘n’ Dave. A versatile musician, who played with everyone from Joe Meek to Eric Clapton, Labi Siffre to Deep Purple and Gene Vincent to Jools Holland, one of his best numbers is a firm PLUC favourite, Ain’t No Pleasing You:

This year’s fete saw the rain start just as we started performing! But we remained largely dry under the marquee, playing two sets of twelve songs in each half, each around forty-five minutes. 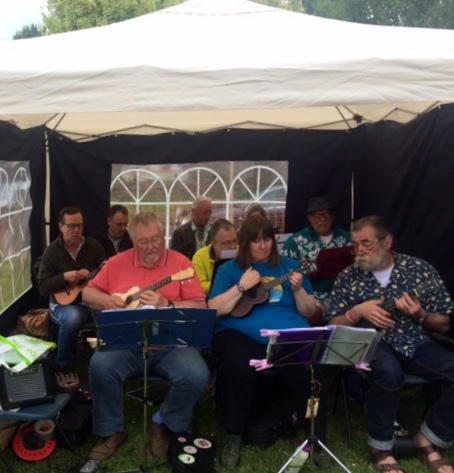 END_OF_DOCUMENT_TOKEN_TO_BE_REPLACED

It’s Paul McCartney’s 75th birthday today (or maybe not, if you subscribe to the Paul Is Dead conspiracy rumours!). Here’s Cynthia Lin with her version of Maybe I’m Amazed. If you’ve not viewed her YouTube channel yet, it’s well worth a look & includes some interesting free uke tutorials. END_OF_DOCUMENT_TOKEN_TO_BE_REPLACED

Here is one of my favourite uke tutorial YouTubes.

This is by Ten Thumbs Productions. Tyler Austenfeld produces a wide range of ukulele materials – he does a couple of new song tutorials every week (from beginners to advanced; classics to the latest chart hits) in addition to lessons covering different playing techniques.

END_OF_DOCUMENT_TOKEN_TO_BE_REPLACED

After much deliberation, we voted for Girl On Fire from Tina’s songs back in October. That joins Kevin’s three songs, as we felt they all had interesting aspects to work up.

Here are Bob’s selections for our final Top Ten. As ever, PLUC members please go & grab the actual versions we’ll be using from our Box (reminder: ask Ed, Steve or me if you don’t understand how to get Box to email you automatically as we post new songs etc in there). If enough people have printed them for this week we’ll play them Tues 8 Dec.& then again in the New Year to pick the one to keep & work on. END_OF_DOCUMENT_TOKEN_TO_BE_REPLACED

Tina has picked three tunes that she always sings aloud, usually whilst hoovering or in the shower!

As before, we’ve put the versions of the songs we’ll be using in the PLUC Box for members. Have a go at playing them & be ready to perform them as a group on Tues 20 & 27 October, after which we’ll vote upon the one that works the best & to keep playing for the next few months. END_OF_DOCUMENT_TOKEN_TO_BE_REPLACED